Tomorrow my daughter turns 7. She is, of course, very excited. The time has flown since I shifted to Wellington 3 months before her birth with no job and no place to live, in the clutches of an unformed relationship which would survive the birth of my wonderful daughter, but not last through the months that followed.

These things can make you reflect, if you have a mind to, and it’s made me realise that last week marked 20 years since I left my hometown of Christchurch to join the ever-increasing pull of New Zealand’s biggest city, Auckland.

I was taking up a 6 month internship in sound at the country’s biggest media organisation, TVNZ. Fresh off a year studying broadcasting, I didn’t expect to spend much time at what I soon learned to call the Death Star. I was just having a look on a path to a more cutting edge employer. But I liked it, staying there, one way or another, for the next 13 years.

If you had told me that back in 1995 I would have run screaming back to Christchurch.

That February was spent on the edge of Auckland’s downtown red-light district, on a couch in the photographic studio of someone I barely knew, looking for somewhere to live. In the pre-internet world of 1995 it meant calling flatmate ads in the Saturday Herald to be told, “it’s gone, mate”, no matter how early I called. It was very frustrating (hooray for the 21st century and online life). My host was very relaxed and welcoming, but the studio was pretty basic with a sink and a fridge, a cat, toilet down the hall, plus the two couches we slept on. It’s where I saw my first cockroach.

It’s been done-up since I stayed there

As no one was supposed to be living there there was no shower. Actually, there was a shower but it was down 5 flights of stairs at the back of a Chinese takeaways. There were mushrooms growing on the walls I presumed were not being cultivated deliberately.

But I didn’t think too much about all that as I was farmed around all the different areas of TV. My first night was a baptism of fire, sitting in the sound room of the nation’s most-watched programme, the 6pm news. My senior, a classic grumpy old bitter-seen-it-all and not-afraid-to-show-it soundie put the show to air after putting tape over the smoke alarm so he could puff sneaky fags while hitting carts and foot pedals, setting off stings, pre-fading tape sources and mics while telling me only an idiot would get into TV and how he had placed radio mics around his house to catch his crazy wife poisoning the minds of his children. 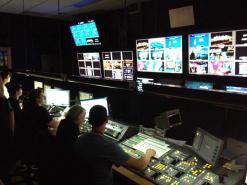 Wrong era, wrong control room, but you get the picture

Given what was to come it was an appropriate baptism.

By the end of the month I had found a place to live in Kingsland, heavily motivated by both my living conditions and visitors like the former male model who turned up straight out of prison to raid the fridge and eat the cat’s food from the can. “Ever had to do this, mate?” Or the persistent whining of my host’s school-girl-model girlfriend saying things like, “you don’t have do anything, just stick it in and I’ll do the rest”.

Over the next 13 years working as a soundie in studio, field and outside broadcast, I saw a lot, did a lot, always with the eye of a writer squirreling away every experience.

One of my 1st jobs. Standing in the middle of this historic sporting moment 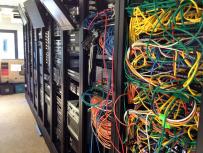 Not all glamour. You have to learn your colour codes

But this is not the time for a tell-all memoir of bright lights and name dropping. That is to come (so I tell myself). When I want to clear my head of the celebrities, politicians and royalty, or the look on the face of the well-loved presenter as I was forced to unzip her cat suit, or the Christmas party where another whispered in my ear, “you are the 2nd best-looking man in the room” only to drunkenly claim an hour later “you are now the best looking man in the room”…he was quite the entertainer, mixing compliment with insult. The summer I spent with a billionaire which culminated in giving him a leg-up over the wall into the best party in town. The joints (and other things) guiltily shared on the way to shoot something important or innocuous. The police detective surrounded by laughing colleagues, tied naked to a tree in the red-light district with a branch sticking out his arse. The netballers sprung using the male showers as I entered, who grabbed too-short towels to (sort of) cover their modesty. The terrifying moment I stumbled into the most powerful (and charismatic) man in the world, despite the world’s tightest security.

The day I was evacuated from a blizzard on a mountain which had claimed many lives. The rocks thrown at the back of my head in a dodgy school. Being driven through the balmy night air of a South Pacific paradise by a sporting hero with an impossible amount of booze. Having a lunchtime beer forced on me by the wife of the 2nd richest man in New Zealand while my superiors looked conflicted. Parents telling stories of loss while the news media was held at bay. The sight of a large un-cleaned clot of blood on a suburban street after a man had lain there all night after being shot by police. The Queens. The Kings. The Dalai Llama. Having a cup of tea in the poorest street in the country. 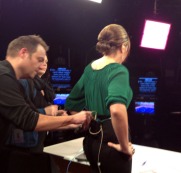 Soundies are always close to the action

The past, indeed, is another world. The land of February 1995 is so foreign I struggle to remember how they did things there. The cell phones were certainly bigger and life was much trickier without things like the internet (wasn’t it?)

7 years ago my life was about to become both trickier and more straight forward with the birth of a beautiful daughter, (unknowingly) conceived in the midst of a world I had no idea was coming to an end. The Global Crash was about to hit and my life in TV would soon become a melange of distant memories.

My girl is growing fast. Her big parties full of friends and food have been replaced by a small select sleep-over of young girls at her mother’s place. It feels strange to miss this transition in her life.

But life is about transitions. New things to experience and remember, old lives lost forever. Paths stepped off and others unwittingly pursued.

What is life if not a story to be lived and recounted with an ever-evolving mix of acceptance and disquiet?

It is time to pick up my daughter from school. I have bought her too many presents, intending to spoil my growing girl and salve my disquiet about tomorrow.

I think we can both be happy with that. 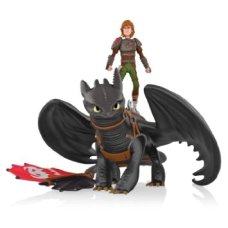