On Saturday night I found myself at a party talking to a woman from Norway. As we chatted I had to restrain myself from randomly asking her about every tiny thing I knew about Norway.

I don’t know a lot, but ever since I had a ‘thing’ with a woman who went there as an exchange student I have learned how to flirt in Norse (badly), and noticed all things Norge in the media.

The Daily Show knowingly used the Swedish Chef to illustrate a story about Norway (archly pointing out that it would annoy any Norwegians watching).

Peggy Olsen in Mad Men told a prospective 1960’s New York flatmate that she was Norwegian, rather than Swedish (the startled young woman replied “Well… we won’t tell my mother.”) Love Peggy so much.

The arch baddie in Hell on Wheels, known as The Swede, comically protests “but I am Norvegian!” Hate the Swede.

Van Alden’s babysitter, Sigrid, in Boardwalk Empire showed shocking enterprise by becoming his wife. And a murderer. And a boot-legger, brewing her national drink, Aquavit, to sell to Norwegian immigrants. Really love Sigrid (even though the actress is Danish).

I first became aware of the Sweden/Norway relationship/history/gag in the film Kitchen Stories from 2003. It illustrates the patronising relationship of Sweden towards Norway through a (real) 1950s study of the kitchen habits of single Norwegian men, where Swedish researchers would silently sit on a high chair in the corner of the room watching the Norwegian bachelor’s every move. It’s a very funny film.

Growing up in Christchurch, New Zealand, I was very aware of the role winning the race to the South Pole played in the burgeoning Norwegian national consciousness. Scott left on his ill-fated journey from Chch in 1912, 7 years after Norway broke away from Sweden. The statue Scott’s wife made of him sat by the Avon until the 2011 earthquake.

But even though NZ was a British colony, and there are many artefacts from Scott’s attempt in Canterbury museum, the bust of Amundsen seems better loved (going by the way everyone touches his nose, polishing the proud bronze beak).

I have written about how much I enjoy the TV show Vikings. How I regularly travel to NZ’s own ‘Viking’ settlements of Dannevirke and Norsewood (One day I shall take a hacksaw and free the giant Vikings that adorn Dannevirke from the anachronistic horns sprouting from their helmets).

I also own a lovely old 2nd-hand book picked up on Waiheke Island 10 years ago. Published in 1949, West Ward Bound is a piece of pure Cold War propaganda that celebrates Norway joining the ‘ring of iron’ surrounding the Atlantic i.e. NATO. I didn’t buy it because of this aspect (ring of iron vs. iron curtain… hilarious!) I wanted the wonderful colour plates that illustrate the mythical/historic Viking past.

Amongst many cheesy 1950s/Medieval images is the taking of Paris in 885 AD by 700 long-ships (Vikings featured it at the climax of season 3, anticipating the settlement of Normandy by Norsemen).

I have always wondered how these Vikings became the French Normans who conquered England in 1066, a few generations later. The History of the English Language podcast I listen to recently filled in a lot of the blanks for me. The Norsemen/Normans quickly switched to speaking French. But they also brought some Norman Norse into English. Creek for a small winding stream (crook and crooked have the same root). Wicket for a small gate (now used in cricket). And the name Gary. 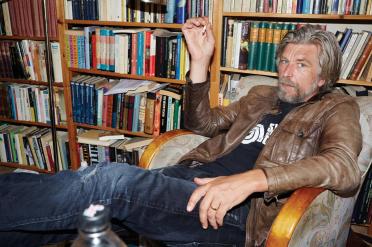 But I didn’t gush any of this  when speaking to the Norwegian woman on Saturday night. Instead, I told her that I was reading the Norwegian publishing sensation, Karl Ove Knausgaard. I am thoroughly enjoying his memoir of being a disaffected teenager in the ‘80s. Playing in shit bands. Pining after the music the English music press wrote about while surrounded by folk and metal. Fumbling encounters with girls. Trying to smuggle beer to a party. Becoming a parent at the same time you lose your own. Struggling to put your art ahead of being a parent/person in the world. His books shouldn’t work. It’s about nothing astounding. But it’s mesmerising. Astounding. Something he wrote while not writing a novel. He has provocatively titled the multi-volume series My Struggle (a knowing echo of Hitler’s Mein Kampf). It has sold so many copies 1 in 10 Norwegians owns it. I’m loving it. Memoir as art. Non-fiction as fiction. The old rules don’t exist. And the reading public approves. 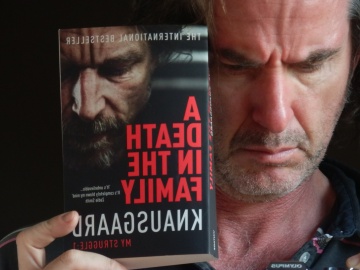 But the Norse woman had not heard of Knausgaard, that rock star of writing. Which disappointed me, slightly.

Nevermind. It was a wonderful evening. One conversation among many. 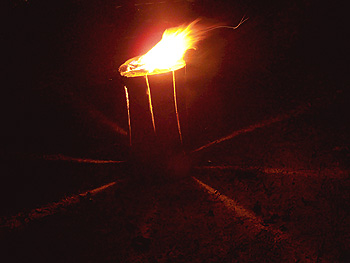 It was a friend’s 40th, and as the sun went down we gathered around one of the gifts, a Viking log candle: a 6 foot log cut long-ways several times and rammed into the earth, allowing it to burn down from the top leaving large charcoal spikes pointing at the night while the fire consumed its heart.