3 Number of times I commented about adding an extra day, just to crack the half century, before eye-rolls commenced.

1 Number of times I asked whether we are ‘at’ or ‘in’ Level 4 before my question appeared to cause physical pain.

7 Number of novels grabbed from the school library shelves the day before lockdown.

2 Number of novels read! Discrepancy attributable to the fine Murakami novel that’s been sitting on my shelf, unread, for 14 years (and 7 house shifts). And the library book, loaned by the wife.

6 Number of whacky family activities devised to pass the time.

0 Number of times we played charades in French or cards in Te Reo. Or, indeed, passed a fine evening reading Dickens aloud to one another.

0 Number of Andrew Lloyd Webber musicals I had watched pre-lockdown.

6.001 Number watched during lockdown. Because they were streaming on YouTube, and it was a bit of a Sunday night treat with dinner on your lap. Don’t judge me!

0.001 Number of viewings of Lloyd Webber’s ‘By Jeeves’ required to prove it is absolutely unwatchable.

27 Number of times the wife or I shouted at the kids to stop blooding singing bloody ‘Phantom’ tunes while they did the dishes. 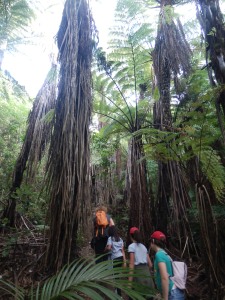 2 Number of birthdays celebrated with a nice walk and homemade takeaways. The lack of consumerism produced two songs, and one dance, in celebration. And one spookily accurate portrait built in Lego.

16 Number of sudden, inexplicable emotional outbursts or meltdowns. Because… yeah.

6 Number of family kick arounds at the park followed by lining the kids up against a wall and throwing a small ball at them.

9 Number of times we wondered what the hell we were doing, and swore to tell no one.

2 Number of times someone in our bubble had to get ‘the tickle’ because they may have the Rona, maybe.

12 Number of various types of rashes, aches, tingles and sudden lumps on the neck that manifested while waiting for the (negative) results.

1 Number of times I called my friends, just to ‘check-in’.

57 Number of times I felt fucking useless for not calling friends or family.

270kms Distance biked or run up and down the river, so I stopped feeling fucking useless, according to my exercise app.

38 Number of times I felt weirdly excited seeing unfamiliar faces when I exercised.

Withheld Number of chocolate bars I didn’t need to buy, or eat, but did. So there.

52 Number of feature stones transported from the river up to our garden, as a direct result of family walks down to the river.

49 x 3 Number of vigorous tummy rubs demanded (and received) by Thomas the cat.

4 Number of times Thomas the cat bit me because I was ignoring his demands.

2 Number of unfinished novels I finally had a chance to work on with all this spare time.

2 Number of such novels totally untouched due to carrying rocks and worrying about strange tingles and odd lumps.

6 Number of new stories written and submitted to competitions here and abroad.

1400 Total number of words in those 6 ridiculously short stories.

Heaps Number of times I suddenly hugged a family member, just because.

Slightly less than heaps Number of times I got a ‘what are you doing?’ look in response.

1 Number of songs I wrote!

60 Number of times I practiced the song over 2 days, because I was so nervous. Singing and playing guitar at the same time? Gah!!!

321 Number of times I said ‘What are you doing?’ during home schooling when the child was ‘just checking’ something on the computer.

321 Number of times a child was ‘arsing about’ on the computer, with good reason.

321 Number of times I asked myself ‘What am I doing?’ by even attempting to keep them on task.

1 Number of times I wore a mask at the supermarket. Felt such a dick.

4 Number of times I held my breath, and awkwardly burst bubbles with a stranger, in the narrow underpass out of Kelson before deciding to use the scuzzy horse underpass instead (even though it seems like a great place to get knifed and lie unfound for days).

36 Number of cut-price Easter eggs purchased and scoffed in the month after Easter.

25 Number of days I wrote in my daily lockdown diary over the 49 days.

0 Number of insightful observations about life under lockdown in said diary.

100% Percentage of days where I just list what I ate and what we watched.

18 Number of times I did an online BodyBalance class with the wife and felt 100% happier, healthier and infinitely more chill.

Withheld Number of times I reached out in the darkness of the night to my beautiful, kind and patient wife just to feel the reassurance of her warmth.

Also withheld Number of times I reached out in the darkness of the night for a slightly different reason.

45 Number of times I got up in the middle of the night to read countless in-depth articles about what was going on.

4 Number of times I shared my half-baked recollections of what I had read.

580 Number of screws and nails and gap-fillers of various sizes and types bought in the mad chaos of Mitre 10 the day before lockdown.

6 Number of long-term maintenance projects I could now complete with all the spare time and 580 screws and nails etc.

37 Number of history podcasts about historical plagues/pandemics listened to that gave me a greater understanding about what’s happening (and what will follow).

23 Number of ‘More or Less’ podcasts on COVID statistics that underline the countless words wasted trying to describe the numbers.

2 Number of times I stayed in bed in the morning. It just felt too depressing and devoid of luxury.

99% Number of nights I stayed up way too late, avoiding the prospect of another day being positive and undaunted.

Zero Number I times I wanted be somewhere else.

Incalculable Number I’ve been thankful to face all this with the patient, kind, loving people I have.