Last night I dreamed I slept with Ellen. We didn’t sleep. We were standing up, face-to-face. Her blue eyes were stunning, invitingly playful, and their beauty almost diverted me from the delicious sensation of how smooth and warm she felt. I was in heaven, I didn’t care that we were standing in the street, I just didn’t want it to end. But then a concern came into her eyes and she said, “I like girls.” I immediately withdrew, and began a flustered apology that ended as I woke. 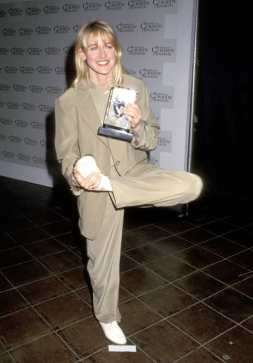 I’ve never had such thoughts about Ellen. I like her. She is engaging and full of play. The only reason she entered my dream was that she appeared briefly in The History of Comedy. The episode focused on female comics, more specifically, American comedians. It was typically chauvinistic, ignoring the rest of the world, and any form of comedy that isn’t stand-up, TV or film. There was no room for the world of comic literature or theatre. Or actual comics.

But that’s not the point. When you’re trying to sell something like an idea, always talk big; include little, exclude much.

I thought about this the other day as I listened to my partner explain the persecution of witches to our three young daughters. They’re smart girls, but as with all broad subjects, things need to be simplified. However, when my partner said that the witch-craze happened because men were afraid of powerful women, I couldn’t hold my tongue. Yes, there was truth in the statement, a lot, but we had both recently listened to a podcast about witches where a telling point was made. The overwhelmingly majority of accusers were low-status women, and girls.

My partner looked at me with a little anger, and kept going. It was not the time to say that the persecution only took root because those in power (men), listened. And when they stopped listening, the wide-spread persecution of witches ended. Such accusations were once more viewed as vexatious, rather than the work of the devil. Europe had gone from the Early Modern period to the Enlightenment, and the brutal religious turmoil of the Reformation no-longer devastated economies, societies, and beliefs. People felt less disrupted and an accusation did not require a witch-hunt.

Yesterday I read Margaret Atwood’s measured, and well-argued, reflections on the #MeToo movement. It lead to brutal attacks devoid of nuance and reflection. Some women felt betrayed. How could the writer of the Handmaid’s Tale ‘attack’ women in this way? Atwood had done none of the things she was accused of. As always, she was brilliant and insightful. But in the narrow minds of her accusers she was a traitor, siding with the inevitable back-lash.

The world is not black and white. Nuance and shade are important. Questioning voices must be heard rather than dismissed. I learned this studying history where historians hardly ever agree on anything (the collective noun = an argumentation of historians). They constantly qualify every opinion (as I did when I added my voice about the witch-craze the other day).

Sometimes it’s best to say nothing if you want to be heard. As with comedy, timing (and delivery) is everything.

I said this to my partner when she wanted to write an angry letter to the editor about a particularly opinionated, and ignorant, review of a book by a writer we both admire. Knausgaard thrills people because he gets at truth in a unique way. When I finally read the review I saw why it had angered my partner. It was badly argued and dismissive, both confident and clueless, with the self-assured tone of a narrowly clever young woman. Worst of all, the reviewer took pride in not having read his wildly successful, and much-loved, previous works. Just because she didn’t like the title. Sniff!

I could see why my partner wanted to strike back. Ignorance is nothing to be proud of. But I’m a bit of a Stoic and I said whatever my partner wrote would be dismissed with a similar lack of comprehension. No actual communication would take place. She needed to turn her anger into something more creative. That is the point of Stoicism. It’s not about holding your tongue. It’s about not being beholden to pleasure or pain. Hard-felt emotions should be acknowledged, released and turned into gold. That way they cease to damage you, and others may enjoy your efforts.

It is important to speak up, to not be fearful. But it is just as important to measure your words, to make sure they address the whole palette, not just the shades you admire.

I have never lusted after Ellen. But I will remember the sensations I felt and the loving, troubled, look in her eye until my last breath. She didn’t need to say a word.