As the first to rise in the house I’ve taken to blasting big bad tunes to rouse the house while we establish the unfamiliar routines of new schools and new house.

The wife, never an early riser, tends to resist alarms and gentle entreaties. Which is only fair, as she makes all the school lunches and sorts out her work clothes the night before.

So when I get up at 06:15, I use the quiet to placate the squawking cat and get the porridge on the stove. Then I walk in circles, tidying dishes and mess, prepping my gears for work or school. I sometimes take the wife a cuppa, but that almost never gets drunk.

By 6:45 it’s time for all to get up. In the past, to avoid shouting like a fishwife or knocking on doors, I used to blast their favourite grooves to entice them to the table. But this week, the first one back at school, I have decided to play brash old music to stir them to action. 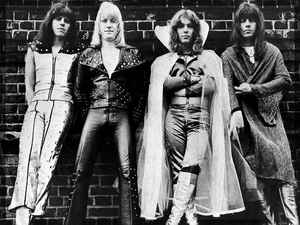 The whole week has all been about The Sweet. Ballroom Blitz and Hellraiser. Poppa Joe and Little Willy. But it has got a bit much, even for me.

Today, I switched in Queen. Bohemian Rhapsody followed by Under Pressure (technically not Glam, but both songs are full of diva dramatics and sequined strutting).

And I can push my voice loud and raunchy on both songs.

Likewise, Sugar Baby Love by The Rubettes. I can rise from the low-pitched verses to the trilling falsetto while inexpertly pumping out the Bump-sha-waddy, Bump sha-waddy-waddy backing vocals, kicking it along like the power house drums.

No one came up to complain.

It was time for Elvis If I Can Dream. Not Glam but big and bold, dramatic; just as out-of-reach as Freddie Mercury or The Rubettes. But oh, how I tried.

So I paused the music and shouted at the top of the stairs, Time to arise and dress for school, sweet sleepers! I will keep singing awful songs until you stop me!

On went Gary Glitter. Hello, Hello… The wife popped her lovely head into the kitchen, mid make-up, and said that song feels different these days. Yes, I said, making a joke I can’t repeat regarding the erstwhile Mr Bucket’s early placing in the pantheon of fallen idols.

I slammed on Rocks by Primal Scream. A song I can strut, and gravel, and holler to. Big, leery, retro-rock boogie; a nice bridge between all the styles. An ever-popular (with me) go-to number on SingStar.

I shall have to try harder tomorrow.