I love music. I love singing. I love hearing stories. I love telling stories. In my mind all these things are part of the same unique human urge. I have referred to this belief in various posts about music, earworms and songs: Needles and Plastic, Songs of September, Quiet Loud Listen Sing, It Was 30 Years Ago…, A Curious Thing, and Music Is A Story.

But this post isn’t about earworms, my crackpot theories or those songs. It’s about three songs I sang repeatedly (and loudly) as I drove the 20 kms into (or from) work in the lead up to Christmas. I loved singing them. They both expressed joy (and caused it), salved pain and cured tiredness. Each time that I sang them (at the top of my voice, with maximum passion), oblivious to any looks from fellow commuters I found something new in some part of the musical composition or production, in the lyrics or vocal expression. 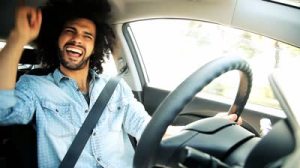 Not my car. Not my song. Probably not me.

What’s more, even though the three songs ended up quite randomly at the start of my ‘Singlesman’ playlist and came from three different decades and musical genres, they slowly revealed themselves to have very striking similarities.

Song #1 is from 1971, Aire of Good Feeling by Wellington band The Quincy Conserve. 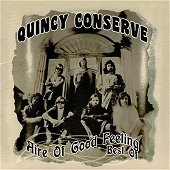 I have loved this song since the first time I heard it on a vinyl disc of New Zealand ‘SuperHits’ purchased in the late ‘80s for $6.99. I snaffled this LP for the usual suspects of Ray Columbus and the Invaders, Craig Scott, Alison Durban, Blerta, Mark Williams, Shane, The La De Das, Shona Laing, Bunny Walters et al…. ‘60s-’70s TV light ent. music, if you will.

It’s hard to remember but at the time (mid/late ‘80s) that style of music was deeply unfashionable, the ‘Classic Hits’ brand of radio was yet to be foisted on us, there was no internet to research or download music so relics like the Quincy Conserve were rare treats to be relished (pun intended). So, as a keen fan of music (and budding musician) I played it many times on the radio shows I DJ-ed on student radio station Radio U (later UFM). I loved the busyness of the drums, the horns, the barely repressed growl of the vocals, the happiness of the lyric and general feel… and the fact that I had only ever heard it on this strange, cheap compilation with an awful yellow cover.

Aire of Good Feeling, comin’ over me

For me, it was a bit of a private treasure that I subsequently lost as music became digital and I was unable to enjoy my records (my vinyl collection sits in crates under the house awaiting the day a record player returns to my living room).

That was until just before Christmas when I saw this condiment on the shelf.

Unsure if the pun was intended, I had to buy it. Disclosure: I love Anathoth (jams, chutneys, relishes) and the quince conserve is typically outstanding (especially with blue cheese on a walnut oat cracker!) Of course, the one song I knew of the Quincy Conserve came back into my head along with a need to hear it. $100 would buy me an okay record player with a USB outlet but $1.97 got me the re-released track on i-Tunes. I’ve said it before and I’ll say it again, I LOVE the 21st century!

Yes, the busy jazz/Keith Moon drums were there (was it super-cool actor/drummer/wild man Bruno Lawrence? I hoped so at the time but doubt it now), but that’s not what struck me as I re-engaged with the old track, thrashing it every time I jumped in the car (it is the meatiest/truest stereo I own). It was the way the bass is up front pumping a repetitive scale/run that drives the tune along on a ride that doesn’t stop. 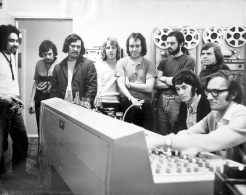 Yes, the horns punch and lift, but it is the distinctive vocals of Malcolm Hayman (threatening to explode but somehow held back like a team of restless bullocks) that share front of stage with the bass. The 30 to 40 times I have sung along to this track have been spent trying to understand (and mimic) his wonderful voice.

Song #2 is a bit of a segue that feels as natural as breathing to me: Rocks by Primal Scream.

I wasn’t familiar with this song until I trawled through Singstar playlists a couple of years ago trying to find something to sing with Singstar buddies who tend to favour Abba and ‘80s kitsch. The straight forward boom-smack Stones/Faces/Sly Stone swagger is fun to sing (especially with a few drinks under the belt), and the lyrics are ironically simple and playful (as good lyrics should be), 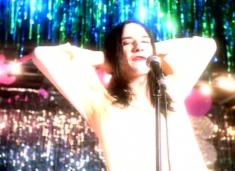 The repetition of form fits the big fat cookie-cutter production (floor toms start smacking along with tambourine, then gat track, then 2nd gat, then bass, then vox… and away we go!!!)

Best of all it fits my rock voice wonderfully…. especially the refrain where the horns sneak in with a sly honky-tonk piano,

Johnny ain’t so cray-zy, he’s always got a line for the lay-dies… yeah, yeah, yeah

I loved doing this song to bits but my singing friends were never so keen, always pushing to do something ‘deceptively complex’ like Fernando. 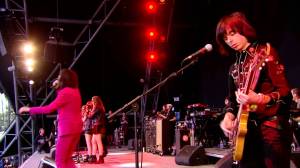 Well, those drinking/singing buddies left town over a year ago so I stopped hearing that song until just before Christmas when I scored some cheap iTunes credit (vouchers 30% off makes singles cheaper that when I started buying them in 1979 at $1.99 each), and decided to add to my Singlesman playlist (I’ve always preferred singles to albums which are so often stuffed with fillers). Rocks had been in my head (ho ho) for some time (but not my ears) so I got a copy for $2.39 and, wow, does it sound good on my car stereo. 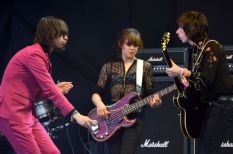 When those floor toms start as Good Feeling ends I feel like I’m right in the room with them, filled with a physical pleasure only certain sounds can bring. The production is astoundingly simple (and clever) slowly building to a stage full of big-band sound that never overwhelms the essential simplicity of the song.

So that’s how I came to belting out

at 7 am in the morning, on a busy motorway into Wellington, ignoring the strange looks, revealing in the harmonies of the beautiful black-girl BVs (who may in fact be white, but that’s the style) opening up the heavens. 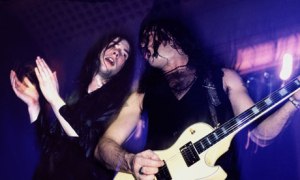 Song #3 (and this is not a ranking just how they ended up on the playlist and, consequently, how the musical progression makes sense to me) is Ride Like the Wind by Christopher Cross, the only song of the three I was aware of when it was released.

It came out at the beginning of 1980, the start of a new decade, just before I became a teen, a few months after I started buying records. If Good Feeling is pure ‘70s and Rocks is solid ‘90s, this is that cold decade in between. Not that this song is cold, it is full of power and life (in a soft-rock kind of way) and is much more late ‘70s in feel than electro ‘80s. 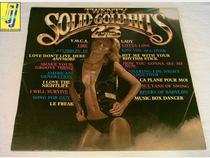 Best Solid Gold Hits LP from the year before Chris

I was no big fan when it came out, my 12-year old ears much preferred the power pop/new wave of the time (I loved Blondie’s Call Me which kept Ride from hitting #1). To me while the song was catchy, Christopher Cross was deeply unappealing so I never sought out the single. But I believe we used to play it at home courtesy of a Sold Gold Hits LP bought for me and my sisters by my parents (I loved those compilations and maybe they are part of why I remain a singles man to this day). 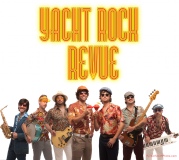 However, I ended up buying a digital copy of the song two years ago after reading about the hilarious (fake) musical genre ‘Yacht Rock’, which is a grouping made up after the event to describe certain cheesy songs of the late ‘70s/early ‘80s (ultra-smooth California soft-rock like Toto, Stevie Nicks, Little River Band, Michael McDonald etc). I found the whole idea hilarious and bought several Yacht Rock tracks which I played for a bit before wearying of the jokey nostalgia.

Nights Are Forever?! No, they just feel that way, boys

(The most enduring has been I’d Really Love to See You Tonight by England Dan & John Ford Coley… the song that comes after Ride on my playlist… pure A.M. cheese and fun to sing with tortured passion, especially the astoundingly bizarre

stay and home and watch TV,

it really doesn’t matter much to me-e-e

And the way they dress, and the hair…wow, I remember when every man looked like that…still waiting for that particular fashion to come back). 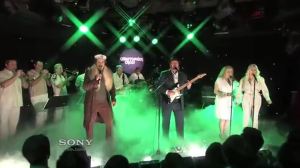 Anyway, a month or so before Christmas there was a random story on Huffington Post about Ride which said that Christopher Cross had written the song while on LSD in the desert. It seemed so improbable (given his image) that I had to listen to the song again. And through that re-engagement it ended up on my sing-every-day list. I started to see the drama of the narrative (a killer on the run fleeing for the border on a stolen horse), and how the tension was expressed in the clipped power of the vocal delivery, help back in the fear of flight. I loved trying to mimic it, and it even began to remind me of the way Malcolm Hayman approached Good Feeling, holding the voice in the gut, letting the repressed power speak for itself, hitting the final consonants hard (something singers usually resist/fudge, wanting the rounded smoothness of vowels).

It is the night, my body’s weak

I’m on the run, no time to speak 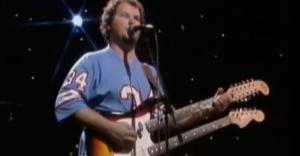 And while Bobby Gillespie approaches Rocks in a quite a different manner (almost bored, joking) it too resists the urge to belt out and warble like a talent show Pop Idol or karaoke klutz. The power is held, hinted at, allowed to sneak out for a peak only when required.

Like the other two songs (Good Feeling and Rocks) it is a big production number requiring at least a dozen people on stage to perform. Ride is driven by congas and an unrelenting repetitive piano riff, but is essentially a trad. rock band set up beefed-up with the usual suspects of horn and string stabs, piano and backing vox (some courtesy of Mr Yacht Rock himself, Michael McDonald).

I doubt if anyone else on Earth has seen the connectedness of these three songs. Or sung them, one after the other, repeatedly. At volume.

Narrative is a strange beast. It comes both at the start, and at the end, while the tune is forming, and once the song is sung.

This post has been in my head since before Christmas, aching for some space to come out. It’s been a fiendishly busy time and I have only just (temporarily) stepped off the treadmill. But with these words excreted on to the page (or screen) every step becomes so much easier.

I no longer sing these songs every day; I sing three quite different songs.

But that, as they say, is another story. 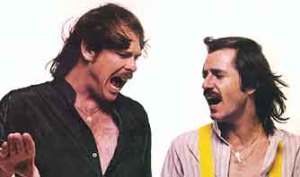