6 years since my last trip to the West Coast with the lads.

33 years since I first went to the bach.

0 amount of power or phone reception at the old fisherman’s bach.

4 expressions of interest in stopping at the notorious ‘F**k Off Café’ in Springfield in order to livestream it’s newsworthy rudeness.

0 visits to ‘F**k Off Café’ after reading that the infamous owners had gone into hiding.

5 Number of times we pulled over and raised the hood of the overheating Terrano.

9 different parts of the engine we inexpertly poked looking for the cause of the gurgling.

11 bottles of water received from friendly Australian tourists at the top of a bitterly cold Otira Gorge in order to fill the radiator.

3 mutterings of discontent regarding the American Brownies purchased at Arthur’s Pass.

66% of mutterings due to lack of sharing of said brownies.

33% of mutterings directly attributable to the unexpected presence of walnuts.

6 pies eaten, at altitude, while resting at Arthur’s Pass.

99.9% ethnic homogeneity observed at the Greymouth New World supermarket (many shades of grey).

8 times we ‘feel the pain of everyone’, thanks to the Dinosaur Jr. (and a poorly performing shuffle algorithm).

7 times someone asks ‘who’s this?’ when a song by Deerhunter is playing.

100% sunny days enjoyed while the rest of the country is pelted with grey winter rain.

2 Number of vegetarian sausages required to sate the hunger of a middle-aged man who’s been drinking in the sun. ‘I might save my other two for breakfast.’

3 varieties of alcohol taken along to enjoy (red wine, vodka and craft beer).

3 guts suffering acid reflux after too much red wine, vodka and craft beer.

100% agreement that acid reflux due to the orange juice mixer rather than vodka etc.

50% of drunken toasts directed to the good ladies at home.

900% Amount of unexpected gameplay found in the ‘alphabet game’ where you go through the alphabet by theme. Bands, girls, fake album titles, Australian(s). Novel names for parts of the anatomy. Marital acts.

Zero muscles pulled, knees scraped and bones fractured while scrabbling over wet boulders in the dark after consuming beer, wine and vodka drink.

1 sighting of another human on the massive West Coast beach over the three days.

100% disappointment due to lack of sightings of seals, whales and dolphins. 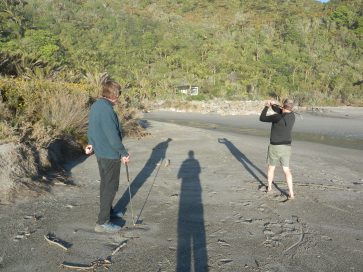 9 spectacular, and challenging, golf holes created on the deserted beach.

1 ricochet fired directly back at a cowering golfer from a treacherous rock.

1 golf ball lost due to the club finally connecting with full force.

66% of middle-aged men actually wore shorts in the middle of winter… because it was so darn sunny!

33% of middle-aged men tough enough to climb the rocks in bare feet.

33% of middle-aged men assured enough to wear their comfy slippers on the rocks. 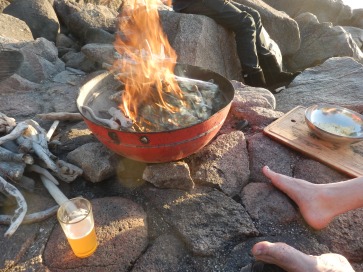 7 theories developed to explain this asymmetry 1. I wash the left side of my body more thoroughly than the right 2. Marmite accumulates on the side of the body you prefer to sleep on 3. The insect-repelling nature of the Vitamin B in Marmite is a bit of a myth, but only half of the time 4. Marmite churned counter-clockwise takes a left-handed bias 5. I forgot to wash my left foot. 6. Sand-flies prefer to dine in well-frequented establishments. 7. I jiggle my right foot more than my left while listening to Deerhunter.

19+ rat droppings discovered in bed after sleeping in it for two nights.

4+ Number of days it takes me to recover from 3 nights in the South Island.