It’s a strange feeling pretending that you are invisible in the middle of a celebration, silently observing, placidly staring in the opposite direction.

My work life has been peppered with such moments. Some came back to me as I watched Team New Zealand win the America’s Cup on the telly this morning. The moments are fresh, but a lifetime ago.

Like a lot of my scruffy South Island peers I grew up writing off the America’s Cup as an elitist rich man’s game. It’s how I felt when Team NZ won the cup in San Diego in 1995 in my first months of working in TV up in Auckland. There was champagne to celebrate at the rugby game I was covering at Eden Park but I didn’t partake.

The following week I worked on the parade down Queen St to welcome home the team and the cup. It all seemed a bit rah-rah to me. Not rock ‘n roll. Sharing a success you yourself hadn’t earned. But that’s sport.

When the defence took place in Auckland in 1999 I got a lot closer, spending every race day on the water chasing the yachts on a camera boat. There were many rough, lumpy days. A lot of hot, becalmed weeks. I read dozens of books and watched people amuse themselves with surfing dogs, dolphins and women in bikinis clambering aboard to say hello to the sailors. 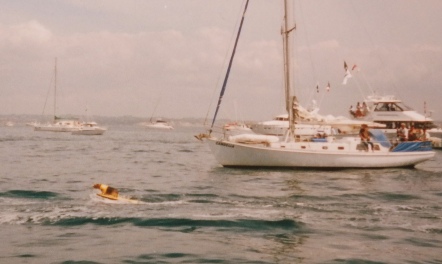 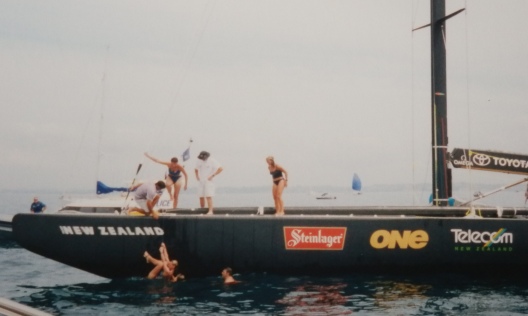 There were parties. Lots of parties. Prada. Team NZ. Louis Vuitton. Free Moet by the bucket. 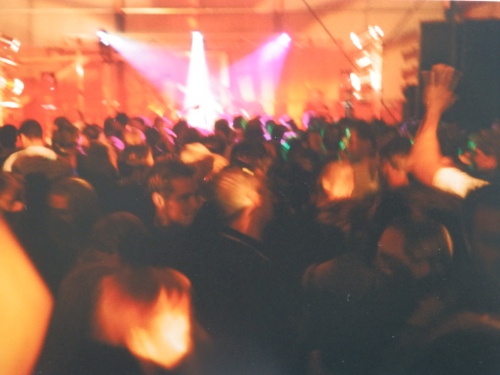 On lay days from racing I did field sound for the billionaire, Bill Koch (youngest of the infamous Koch brothers, shapers of American politics with deep, shady pockets). Bill was great. A big kid. He had won the America’s Cup with America3 and just wanted to interview all his friends for fun. He put on a bbq to thank everyone at the end of the event. It was a little bit Great Gatsby. White linen tables in front of a cliff-top mansion over-looking Rangitoto and the Hauraki Gulf. Silver service and a famous band playing on the rolling lawn. He sat with me to eat his dinner; a nice touch when so many rich and important people in need of schmoozing. 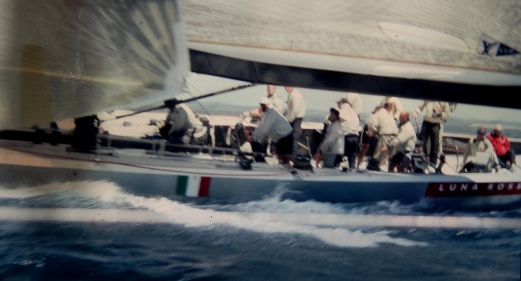 I wish I had pictures of that night, but all the spectacle became so normal and every day, and, unlike now, everything didn’t need a digital record to exist.

On the day Team NZ successfully defended the cup I was deployed on land, so to speak, bobbing about in the centre of the Viaduct on a pontoon awaiting the arrival of the winners and the presentation of the world’s oldest sporting trophy. I had rigged a radio mic on the podium earlier in the day and had a wired backup concealed within reach.

As Russell Coutts lifted the Auld Mug with his young apprentice Dean Barker the confetti bombs exploded and thousands cheered. It was deafening. I looked behind me to the camera people held back by security, took a photo of the drunk and excited crowd, and wondered how invisible I could be.

In shorts, bottom right, taking first photo in this post

Dazed from the heat and humidity, and a 10 hour trip (plus afternoon rums in the Koru lounge in Auckland and Merlot with dinner), I ticked ‘sport’ on the immigration card. When questioned I said, business and sport. The rugby. The Blues and Reds. The referees? The giant official smiled from behind his tiny desk, amended the card, and handed me back my passport.

We picked up our rental and drove to the resort by the airport ‘turn right, drive a few minutes… bump!… first right’. The directions were spot on. The gates to Aggie Grey’s Sheraton Resort were indeed right after a sudden bump.

In my room I fiddled with the telly, trying to decide if I needed food. But it was 10pm. I was exhausted and needed sleep. 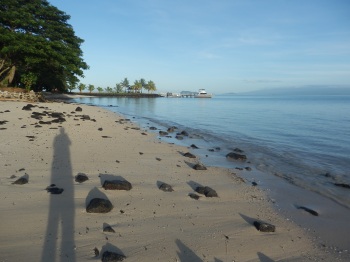 I woke with my throat raw. Two flights. Sleeping with air-con. I walked out my patio to the white sands, took a dazed selfie to post on Facebook then joined my workmate for breakfast in the Apolima Fale. It was paradise eating with no walls and such beauty.

Unlike everyone else working on the first Super Rugby game in Samoa we weren’t staying in town, so we had a one hour drive along the coast through village after village, ramshackle and pristine, proud of famous sons The village of David Tua, The village of Joseph Parker etc. I took passing photo after passing photo of open fales, little family stores and concrete swimming holes, all obliterated by bad light or my reflection.

It was as I remembered from 1999, but much tidier. The rubbish scattered everywhere was now all absent. There are stands all along the road where rubbish is left so roaming dogs can’t get at it. Some are homemade. Some are engineered metal with labels saying ‘Australian Aid’. 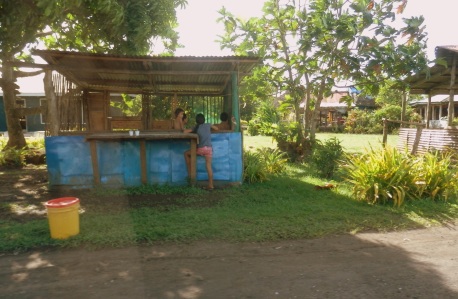 As we got closer to Apia bunting and flags lined the road. For rugby? Apia was jammed with people. Markets and stalls everywhere. We were funnelled away from our destination by closed roads and police. It was Independence Day. Samoa was celebrating throwing off its New Zealand overlord. NZ likes to think it was a benign ‘administrator’ who liberated Samoa from Germany at the start of WWI. But we didn’t let go and our officials mowed down peaceful marchers when they asked for freedom. 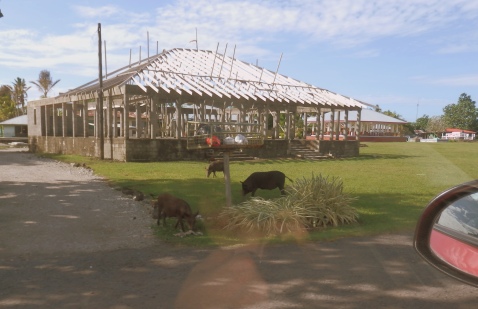 There’s a wonderful Samoan song that remembers that atrocity. I learned it years ago when acting in a Samoan play. I sometimes sing it in the shower, delighting in the onomatopoeic sound of the Samoan word for machine gun. Fanata’avilli. Rat-a-tat-tat.

It was hot and humid at the stadium. With four road cases to carry up the steep concrete steps to our booth at the top of the stand we took it slow, but it was hard going and my colleague soon began to feel faint and unwell. There was an air con unit but no remote control. It took forever to find someone who understood what we needed.

Heat and lack of water aside, it was an easy rig. I had to clamber onto a dodgy rusty, dusty, roof to rig aerials; a challenge with the grade-2 muscle tear I gave myself when I slipped on some rocks last weekend. But I was strapped from crotch to knee with purple tape so I was reasonably mobile. From the breezy, shaded cool of the roof I looked down to the two fullahs mowing the field. With t-shirts tied over their heads to shield them from the sun, they pushed two domestic lawn mowers across the entire pitch; slowly doing a job done by ride-on mowers in NZ. The average hourly rate is $1.50 over here.

By 2pm we were done. I’ve never been so thirsty. Though it seemed wrong we couldn’t face the bustle and heat of Apia in celebration. We weren’t here to tourist, so headed to Frankie Hypermarket to pick up bottled water and drive back to the resort. 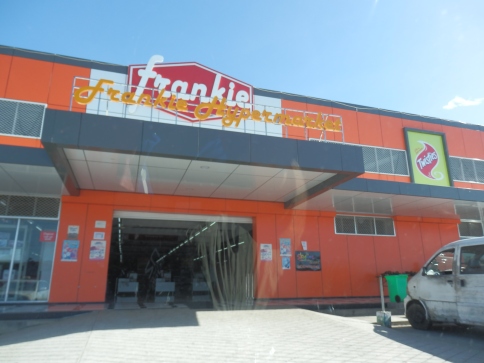 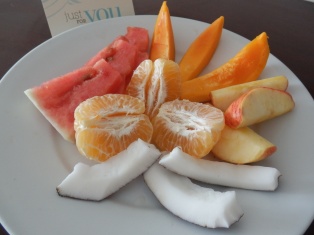 After inhaling the plate of fruit left in my room I lay down on the bed to sleep. But as soon as I closed my eyes I felt bad. What a waste. I couldn’t hide in the air-con, no matter how tired I felt, so I put on my togs and headed to the pool. The water was stunning but I couldn’t swim with my torn thigh so I floated about in the empty pool (where was everyone?) before grabbing a sun longer on the beach to watch the ocean breaking on the distant reef.

Four Australians turned up with drinks on the chairs beside me. The pool bar was unattended so I went up the main bar in my wet togs, trying not to feel self-conscious. It was happy hour. For the next 90 minutes! Alone in paradise I slowly made my way through the NZ$8 cocktails. Apolima Sunrise, Midori Splice and Blue Lagoon. Tequila, Midori, Vodka, Malibu, Blue Curacao and Orange Liqueur all went down easy as I skited on Facebook and listened to the Aussies mither about wedding fails.

So I put on a smile and put on the shitty dress. It’s what bridesmaids do. She wanted to arrive in a helicopter. A helicopter. I said, if you do that my hair will be all to shit. To shit. I literally bit my tongue for two weeks. So she dicked the best man to get back at him. Well you would, wouldn’t you? They’re still together. Toronto. Toronto for fuck’s sake.

The man drank beer in silence as his three bikinied companions competitively relived each horror. I guess he had never been to a bad wedding.

I’m flying to Samoa. The last time I went there it was last century, the end of the millennium. To a thirty-something New Zealander Samoa was the island of the day before. Since then the world has changed. More than once. It was 1999. We partied like it was and tried not to fret about Y2K and planes falling from the sky. Now I am 50 and Samoa has jumped the international dateline from yesterday to today. The past is here.

I’m off for work rather than pleasure. Like the winter of 1999, it’s rugby. There are worse ways to earn a buck.

Back then I was with a TV crew doing the first live broadcast of a big event from the islands. There was bit of pressure. We came over on the Saturday, did the game between Manu Samoa and USA on the Sunday, and then flew back to Auckland on the Monday. We stayed at Aggie Grey’s in Apia and drank cocktails in the pool. I got the Marlon Brando fale. As a one-time actor I imagined he had once been in the same room and busted out a Stanley Kowalski ‘Stella!” in tribute.

18 years ago the plane was small. I watched ‘Shakespeare In Love’ and ‘My Favourite Martian”; the best of the few films on offer. This time the entertainment selection is huge, but not enough to drag me off my own devices… tablet, phone, journal.

Last time I took about 6 photos on the whole trip. This time I’d taken twice that before we left the runway. 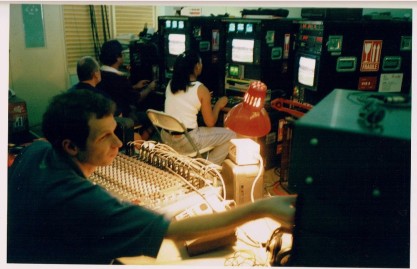 To be fair, in 1999 I also shot a 3 minute reel on my vintage 1970s Super 8mm camera. The travelogue was wholly edited in-camera, with titles and funny gags. I dug it out and watched it yesterday. The USA was led out by a man in combat gear jumping up and down, waving the stars and stripes. At the time I couldn’t work out if it was naïve or on point, and wondered what the Americans thought about being represented by this. Were they proud or dismayed? Or just indifferent? Manu Samoa had an oiled-up man carrying two flaming torches. It looked great in the tropical sun. 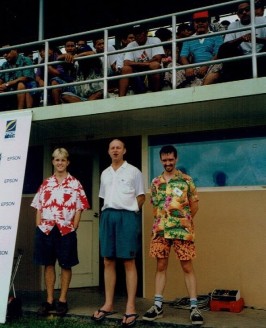 That night, after a reception at the embassy, I had a beer on the town with some of the American players. They were just happy to be there; proud of their amateur status against a team full of professionals. ‘We’re builders, and teachers, that’s amazing, ain’t it?’

It is less than an hour until we land. Outside it is dark. No longer the island of the day before, Samoa is now an hour ahead of New Zealand. A balmy 28 degree evening awaits our arrival. It was 12 degrees when I left Wellington this morning. Cold. Windy. Autumn. It’s going to be an interesting few days.