I’m watching Mission Cleopatra with my 8 year-old daughter. It’s a funny film. Her choice. She plucked it from the plethora available, avoiding the usual Simpsons or the good/awful Grammy performances we’ve been making our way through.

I recently turned her on to the Asterix books I loved as a child, so I thought it might be fun to see the film. But I must say it seems to lack the magic of the original Goscinny and Uderzo books. Maybe it’s because I’m not French, or because it’s live action (filled with seemingly-hammy French actors) that it seems a bit flat. The fact that the fine comic French actors are over-dubbed with dry American voices close mic-ed in a dull/dead studio certainly doesn’t help. There seems little atmosphere, no charm. The wonderfully barrel-chested Gerard Depardieu/Obelix voiced by an empty US teenage voice just sounds weird.

But my 8 year-old thinks it’s ‘great’. She loves the original book. Likes things French. Has a francophone mother. Is fascinated by Egypt. Adores the Egyptians in Horrible Histories. Often dances to their Lady Gaga-themed Rah-Rah-Cleopatra song. Is slowly making her way through an Older Fiction ‘autobiography’ of Cleopatra from the library, saying names like Berenice and Ptolomy in her own 8-year old way. 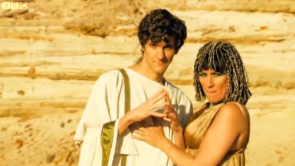 Last week we started watching a cool BBC documentary called ‘Immortal Egypt’ which has made ancient Egypt a lot clearer to me than it has ever been. I finally understand the difference between Upper and Lower Egypt, and the three different kingdoms, thanks to the captivatingly passionate professor who has to shade her pasty Brit skin from the Egyptian sun with an umbrella employed for its proper purpose.

Me, I’ve always been much more into the Romans. And, to a lesser degree, the Greeks. Which may be why I have always had more of a taste for the Ptolomys, the Greco/Egyptian dynasty founded by Alexander’s general, Ptolomy, who started the line that ended when Cleopatra went out with a bang with Mark Antony having moved on from lover #1, Mr. Caesar (who every Asterix fan knows is a big-nosed pompous arse). 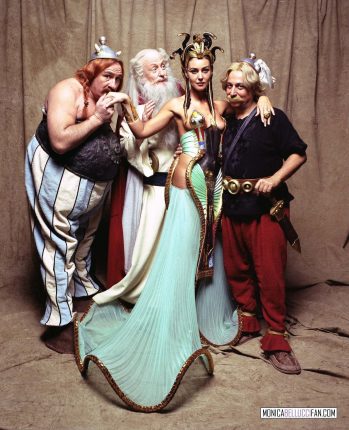 The film is full of gags. While Starkius and Hutchkis racing off in a chariot is wasted on my girl, she gets the Star Wars references about an evil empire. And the Gluteus Maximus gag.

Yes. It’s fun. Bang crash. Very French. Yes, my girl loves it. Has asked to get the Asterix book out from the library again.

But, again, enough history. I am having bean bags thrown at me. I shall stop tapping away on the tablet.

Time to play Asterix and Obelix. Gauls fighting Romans. Egyptians on the side.