This a quick rant on a great love. My great love is history, or more precisely, the magazine History Today. It’s a wonderful collection of images and writing put together in a way that thrills and inspires me.

I can think of nothing better than lazing in bed reading articles about something I thought I had minimal interest in, before discovering that it fascinates me to such a degree I want to tell the world about it.

I’m particularly enraptured with the February 2015 issue which featured a stunning cover of Mosley and his boy band of British Union of Fascists. It’s a great snap made prettier and more poignant by being superimposed over an orange Union Jack.

I have delighted in the picture every time I’ve read the magazine, which I read cover to cover. It’s an aspect that has stopped me from reading the magazine online. Yes online is convenient, but I spend so much time staring at screens… and nothing can match the presence and feel of a well laid-out magazine.

The article was clearly timed to provide context to the (at the time) upcoming UK election where the populist ultra right-wing UKIP party was getting so much support. So often, the articles seem to be about now.

Before selfies, there were paintings

I have only read about Mosley in his wife’s autobiography ‘A Life of Contrasts’ which, unsurprisingly, has nothing bad to same about him. Diana Mosley was one of the glamorous Mitford sisters. Growing up with the Churchill’s these aristocratic debutantes/socialites/celebrities were the Bright Young Things who wowed inter-war society. Her sister, Nancy Mitford, was the well-known novelist, while Unity Valkyrie Mitford was so in love with Hitler she shot herself when Britain declared war on Germany.

There is a whole shelf-load of books written about these girls.

I always thought Mosley was a bit of a joke; a twit who backed the wrong side in WWII. He and his Blackshirt cronies look like an early ‘80s neo-Goth/New Romantic dad-band in their funny-button shirts and tricky belts.

The cute one, the tubby one, the scary one, the one that plays the drums

But then, fascism had many fans at the time (Charles Lindbergh loved the Nazis and tried to keep the USA out of WWII). 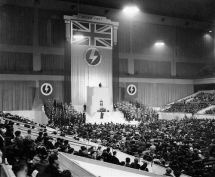 I once did a course with someone who went to a British Fascist rally in the 1930s. His father took him to mock Mosley and see how deluded the fascists were. At the meeting some communists, or anti-fascists, tried to storm the stage (resistance was strong in Britain). They were roughed-up in trademark Blackshirt fashion: gloved fingers shoved up noses to tear blood vessels, disabling without striking.

Co-incidentally, on the same writing course I met the woman who had written the number one book in New Zealand. It was a childhood memoir of her Nazi father, and having strawberries with the Fuhrer. When I held her hand I felt the most incredible dread knowing she had shaken hands with the monster she described as friendly and funny.

The past comes close in such moments, and I have always struggled to understand those who do not feel the magic. Is the ignorance wilful? Or is it simply a failure to imagine how things are, were and will be? 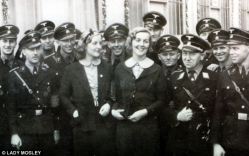 Diana & Unity yuk it up with German chums

When I read these magazines I always wonder who I would most like to meet. It would not be Mosley, the Mitfords or Hitler.

It would be this marvellous woman speaking to an anti-fascist rally in Trafalgar Square in 1933.

She is striking the most incredible pose, shaking her fist at the crowd, telling them what’s what, what is to come. I know nothing more than what the words say, that she is suffragist called Charlotte Despard.

I can’t wait to learn more.